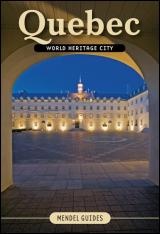 In 1985, Quebec City's historic district became the first urban ensemble in North America to be declared a World Heritage Site by UNESCO. With its spectacular cliff-top location overlooking the St. Lawrence River, its fortifications, narrow winding streets and wealth of historic buildings spanning four centuries, Quebec is unlike any other city on the continent. In this fascinating guide, Quebec's dramatic history is placed in an international context and in-depth information is combined with exceptional photographs to reveal the meaning and beauty of each site. An outline of the history of every major location is followed by a step-by-step visual exploration in which general exterior and interior views are followed by photographs of selected objects, symbols and architectural elements. Architectural historian David Mendel, a resident of the Old City since 1976, has spent decades studying Quebec and its history. A renowned speaker and expert guide, he has given tours for thousands of visitors, including many Heads of State. As President of Baillairgé Cultural tours, he has organized tours and seminars for more than 20 years. To create this series of guide books, he has joined forces with Luc-Antoine Couturier, whose inspiring photographs capture the essence of Quebec City through the magic of light.