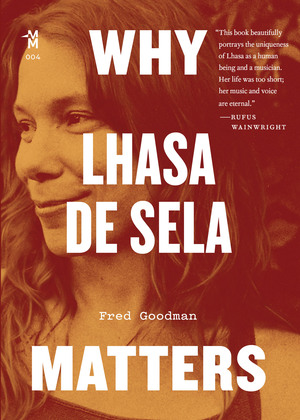 An artist in every sense of the word, Lhasa de Sela wowed audiences around the globe with her multilingual songs and spellbinding performances, mixing together everything from Gypsy music to Mexican rancheras, Americana and jazz, chanson française, and South American folk melodies. In Canada, her album La Llorona won the Juno Award and went gold, and its follow-up, The Living Road, won a BBC World Music Award. Tragically, de Sela succumbed to breast cancer in 2010 at the age of thirty-seven after recording her final album, Lhasa.

Tracing de Sela’s unconventional life and introducing her to a new generation, Why Lhasa de Sela Matters is the first biography of this sophisticated creative icon. Raised in a hippie family traveling between the United States and Mexico in a converted school bus, de Sela developed an unquenchable curiosity, with equal affinities for the romantic, mystic, and cerebral. Becoming a sensation in Montreal and Europe, the trilingual singer rejected a conventional path to fame, joining her sisters’ circus troupe in France. Revealing the details of these and other experiences that inspired de Sela to write such vibrant, otherworldly music, Why Lhasa de Sela Matters sings with the spirit of this gifted firebrand.